Jonathan Frakes, Genie Francis and the Meaning of Christmas

Jonathan Frakes (yes, that Jonathan Frakes) made an appearance at the Belfast, Maine planning board the other night, to speak out against a proposed social services center that would be housed in the former Jed's Restaurant.

Jonathan Frakes of 31 Searsport Ave. pictured homeless drug and alcohol abusers getting run over as they walk to the service center.

"I feel the project would be a blight on the community and would deter business," Frakes said.

Of course the former Will Riker is quite concerned about business near the service center, since his wife Genie Francis (yes, that Genie Francis) has recently opened a home furnishings store about a tenth of a mile from Jed's. Here's a satellite image to give you an idea. The former Jed's Restaurant is at 49 Searsport Ave., while The Cherished Home is at #31. 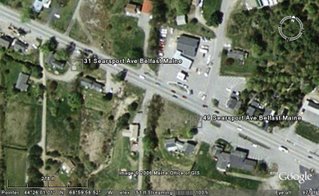 First, let's look into Frakes' painful imagining of "homeless drug and alcohol abusers getting run over as they walk to the service center".

Look at this satellite view, which pulls back a bit to show the bridges from Belfast proper to the East Side. 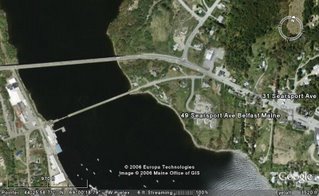 The lower bridge across the Passagassawakeag River is purely for pedestrians. It's just been nicely refurbished, at no small expense. Lots of folks in Belfast wanted more pedestrians coming your way, Jonathan. Sorry. But you knew that before your wife opened the store.

Maybe Mr. Frakes is concerned about the folks who live in the trailer colony along the eastern bank of the Passy. Lucky for them, they've got a crosswalk where their road meets Route One.

How about the folks who are coming from out of town, and don't know their way around? If Grace International Corp. gets the social service center up and running, I'd have to imagine that their clients would be able to make use of the Waldo Community Action Partners' Transportation Services.

Okay, it's probably true. But here's why I have little sympathy.

Just look at some of the products Francis is selling. This is the sort of retail establishment that, like most, will get its big sales during the Christmas shopping season.

What happens when some authentic Christians show up in the neighborhood, and try and help the poor and afflicted? Nope, can't have that!

I wish I had a better word than hypocritical to use here, since it doesn't really seem to fit. But the fact that Frakes and Francis seem willing to economically exploit one of the major Christian holidays while working to thwart the activities of Christians who are focusing on charitable deeds doesn't seem too becoming.

I'm just a Buddhist in the backwoods of Maine who's likely going to eternal damnation, as Mike Hein of the Maine Christian Civic league disparagingly referred to me. But I know enough to support Christian efforts to help the poor, battered women and addicts. Even if I were a Christian, I probably wouldn't be the kind of Christian that would join Grace International Corp. But I would support their efforts in this project. Wholeheartedly. Even Buddhists understand the True Meaning of Christmas.